Although Jesus never had a pet that we know of, He does talk a fair bit about animals. For example, He says that not a single sparrow is forgotten before God (Luke 12:6). There are almost 100 animals named in the Bible, although we can’t identify some of these creatures with certainty due to linguistic challenges. The animals that most often occupy the average person’s world today–dogs and cats–don’t hold a very important place in the Bible. A few animals in the Bible are worthy of special mention: 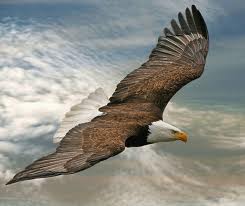 Because of its great wingspan, an eagle is able to soar higher than most birds, flying above storms and dangerous weather patterns. In addition, if you watch an eagle fly, you will notice very little flapping as it spreads its wings; this helps the eagle conserve energy. The faithful are promised that if they wait upon the Lord, they shall renew their strength; they shall mount up with wings like eagles (Isaiah 40:31). Like the eagle, if you wait upon the Lord, you’ll be able to mount so high that you will bypass many storms, and while mid the flights of life, you won’t grow weary easily. On the other hand, if you rely solely on your own strength, you might find yourself more like the Dodo bird, unable to fly and on your way to extinction.

Foxes aren’t looked upon kindly in the Bible. They are little and wily and often destructive. In the Song of Solomon, we are told to catch the foxes, “the little foxes that spoil the vineyards.” (Song of Solomon 2: 15). Foxes ruin vines and destroy the fruit. In spite of their small size, they can cause a lot of damage. Do you have little foxes in your life? Things that seem inconsequential, but could be ruining your marriage, your finances, your character, or your relationship with God?

One of the animals that gets a lot of attention in the Bible is sheep. Jesus calls Himself the Good Shepherd and David calls the Lord his shepherd. This makes you and me sheep, which isn’t a bad deal when you consider the shepherd’s role as protector and provider. The sheep don’t get to lie around and be lazy. They have to be willing to be led to green pastures, something not easy to find in the plains of Israel. But if the sheep cooperate, a wise and good shepherd can lead them where they know no want and the waters are still.

Upon occasion, Biblical animals appear to be smarter than the humans. This is a trend that seems to continue in our world today when you consider the behavior of some people. Balaam’s donkey was such an animal. Balaam was a prophet during the time of conquest. When Israel encamped the plains of Moab, the King of Moab, Balak, sent for Balaam, expressly to have him curse Israel (Numbers 22). The Lord told Balaam not to go, but eventually, Balaam gave in and went. On the way, God sent His angel to prevent Balaam from going. Balaam’s donkey saw the angel and tried to avoid him, knowing that the life of her master was in danger. Three times he did this and Balaam, who wasn’t as wise as his donkey and missed the presence of the angel, hit his donkey in frustration. Finally, the donkey opened her mouth with God’s help and said, “What have I done to you, that you have struck me these three times?” and she pointed out the angel to Balaam. After that, Balaam straightened out his act and instead of cursing Israel, he blessed them four times.

This means if you are too stupid to listen to God, He can make even a donkey speak up to sort you out. Whenever I have to speak publicly, I find comfort in the fact that God opened the mouth of Balaam’s donkey. If a donkey can speak sense with God’s help, then so can you and I.

8 responses to “Animals in Biblical Times”